Trains was designed by Hisashi Hayashi and published by Alderac Entertainment Group (AEG) in 2013. A deck-building game for between 2 and 4 players, Trains plays very similarly to Dominion, with one major exception: there is a strategic board game portion as well as tactical deck management. This game is one of my favorites and has become a go-to for myself and a couple of the guys I game with on Wednesday nights. I thought I’d share the rules, some photos of the game itself, and some of my thoughts on what makes this a great game. 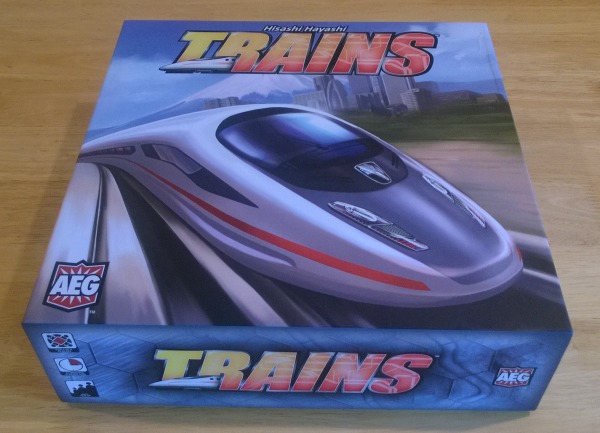 For those of you not familiar with “deck-building” games or Dominion, the major mechanic of these types of games is using cards from your starting deck in order to purchase additional cards. These purchased cards then go into your deck and allow you to modify your actions on further turns in the game. Purchased cards can affect how subsequent turns play out in a number of ways, by granting additional buying power, by allowing you to ignore other costs or rules of the game, and by granting points toward your victory. 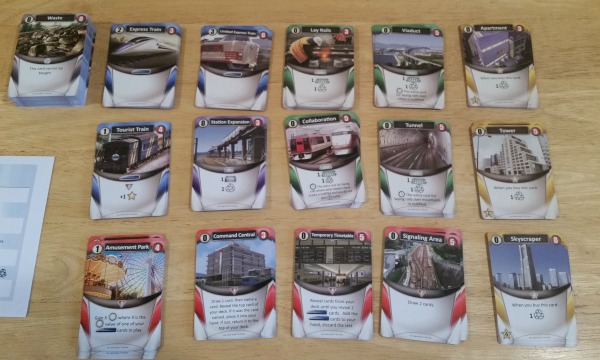 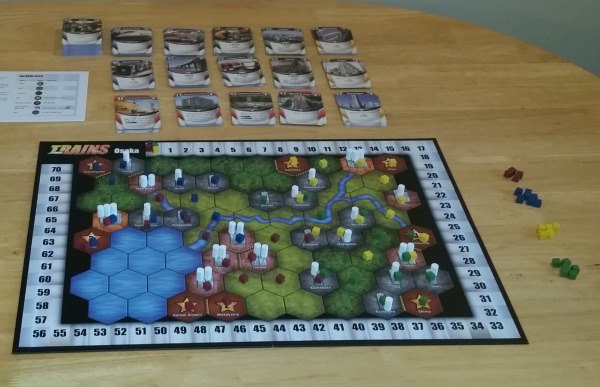 Depending on how you’ve organized the cards in your box, and how familiar each player is with the rules and the cards in play, game setup can take between 5 and 20 minutes. Play time is listed as 45 minutes, but if the group is not familiar with deck-building games, a game can take as long as 2 hours.

This is because, by Trains’ very nature, each game is slightly different than the last. The standard game comes with a double-sided board, 530 cards, station tokens, rail tokens, a rulebook, and a set of card dividers to permit easy storage. Included in the cards is a set of Randomizers. This is a separate deck that gets shuffled prior to each game and the top 8 cards are drawn. The players then pull the 8 stacks listed by the Randomizers, as well as 7 other stacks of cards that are included in every game, and a stack of Waste cards. I have found it useful to go through the cards at the beginning and explain how they work, as this cuts down on the amount of time players spend in the middle of the game trying to decide which cards to buy and re-reading them over and over again. 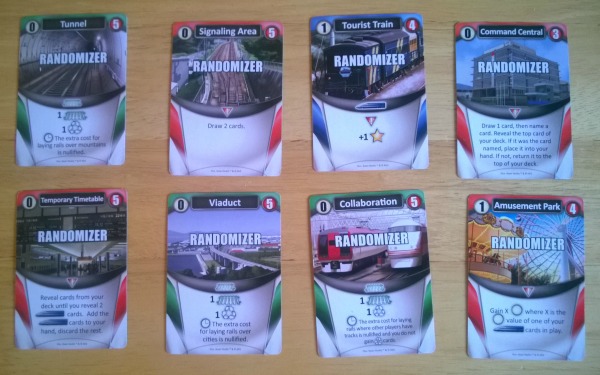 Victory Conditions:
There are three different ways to trigger the end of the game: a player places all of his colored wooden rail tokens, all of the wooden station tokens have been played, or 4 of the 15 card stacks have been exhausted. The Waste card stack does not count toward this total. If any of these conditions are met, the game ends immediately and other players do not get additional turns. Points are counted immediately and victory goes to the player with the highest number of points.

Gameplay:
The player who has most recently been on a train is supposed to be the one who goes first, but we find that randomly selecting a player’s color is the best way to make the decision. The starting player chooses their first city and places one of their cubes there. This proceeds to the left until all players have picked a starting city. Choosing your starting city is very important, as each city is potentially worth different points at the end of the game. The number of skyscraper icons on the city indicates the number of wooden station tokens that can be played there, and because station tokens are worth points at the end of the game, cities that can have 2 and 3 tokens are worth much more than cities that can only contain one station.

Once starting positions are selected, each player shuffles their identical 10-card starting decks and draws 5 cards. Players can use the cards in their hands in any way or any order they want. There are no limits to the number of actions they can take, so given the right set of cards, a player can purchase a new card for their deck, expand their rail system, and place a station token on the same turn. Once a player has exhausted their actions, the next player takes their turn.

In the base Trains game, player interactions are limited to the strategic level. There is an increasing cost associated with placing tokens on a space on the board where another player or players have already played, so there is a benefit to getting to a city first. Additionally, station tokens add cost to entering a city as well, making cities that are worth a high number of points being prohibitively costly to enter. But because station points are awarded to all players that have rails in that city, this can often be a cost worth incurring. 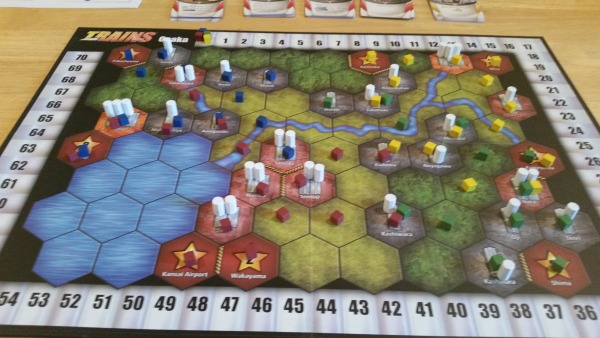 Game Design:
Trains has two levels of gameplay that are intimately entwined: deck-building and strategic play on the board. Players tactically use the cards from their hand to improve their deck, support their overall strategy, and to play pieces on the board. Strategic play on the board is what yields the largest number of points, so a deck that grants you the most flexibility to adapt to the other players’ strategic placement is very important. Luckily, unlike Dominion, every card in Trains has a use, and many of them synergize well with each other.

Each card has a purchase cost (how much it costs to buy the card in order to add it to your deck), buying power (how much money the card grants you when it is played), special action (something unique that this card does when played), and in some cases, victory points. For example, your starting deck is made up of:
7 Normal Trains — no special actions, buying power of 1 each
2 Lay Rails — no buying power, but gives players the ability to expand their rail network
1 Station Expansion — no buying power, but lets players place a wooden station token for points at the end of the game 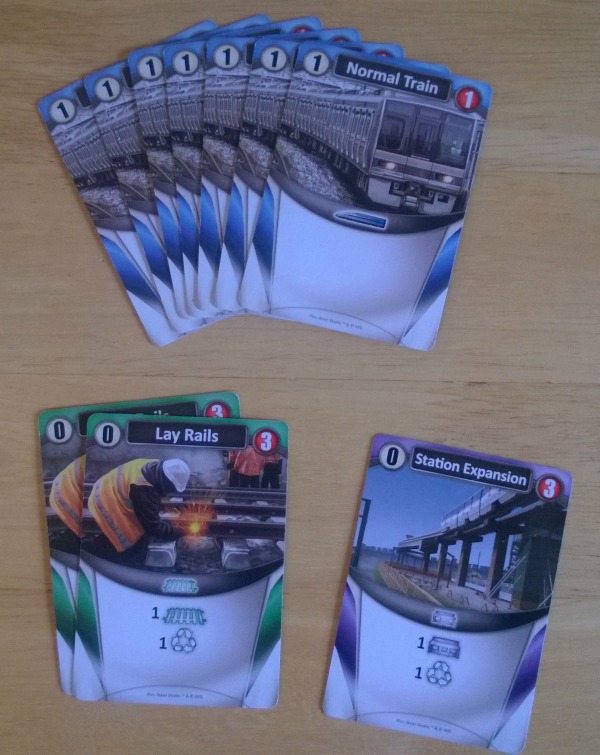 Because you have a limit to the number of station tokens that can be placed in each city, and you cannot place new station tokens in cities you do not have rails, you have to expand your presence on the board in order to accumulate points. Laying rails ranges in cost, depending on the type of tile (city, grassland, river, or mountain that looks disturbingly like a forest), whether other players already have a presence there, and the number of stations present in a city. There are also barricades to expansion (yellow and black indicators on the board) that require you to go around them, which can make for interesting interactions when other players are vying for the same location. Lastly, there are “Remote” locations that are cities, but are worth a finite number of points and there is no possibility of placing station tokens on them. These cities cost more to move into, but are immediately worth points and do not require station expansions in order to make them viable to your overall strategy.

Game Balance:
Trains is also very well balanced by using Waste cards. Waste cards serve no function in your deck and do nothing but clutter everything up. Because you draw 5 cards on your turn, having Waste cards in your deck can often decrease your options each turn, slowing the overall speed of your gameplay. Waste cards automatically come into your deck when you perform certain actions, such as playing Lay Rails cards to expand your rail network. Luckily, there are a few options. You can choose to take no action on your turn and return all Waste cards in your hand to the Waste deck, but that’s inefficient. Better options include the purchase of cards from the staging area that allow you to benefit from the waste, by discarding it for money, discarding it to draw new cards, or even cards that allow you to take no Waste that turn from actions that would normally generate it. In effect, you walk a fine line between expansion, which generates Waste, and removing that Waste from your deck.

The purchase cost of a card is also a good indicator of its overall power within the game. Subway cards cost 7 money to purchase, but allow you to ignore all additional costs associated with moving into another player’s territory. You still incur the additional waste card, but being able to move into a city with three station tokens worth 8 points for no monetary cost is incredibly powerful. On the other hand, some of the lower cost cards can be powerful when used correctly.

There are other balancing factors as well. In order to move into another players territory, as defined by where they have placed their rail tokens, you have to be willing to pay an additional monetary cost and to incur additional Waste generation. There are also cards to be purchased and added to your deck that allow you to ignore either the monetary cost increases, the Waste generation penalties, or both. Needless to say, these cards are very costly to purchase. These additional costs serve to deter encroachment early in the game, before players can afford these expensive cards that allow them to expand with impunity. As a result, players tend to stay within their own territory early, and then expand at the end of the game in a mad dash to secure a foothold in cities that are already worth points. 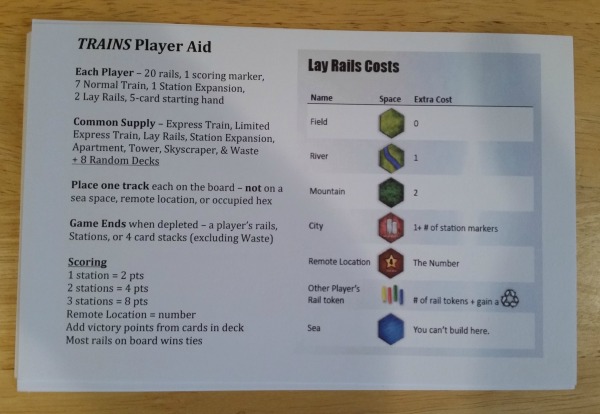 Player aids don’t come with the base game. A friend of mine made these up using information listed in the rulebook.

Overall Impression:
I enjoy Trains more than I do standard deck-building games because of the added strategic elements on the board. The ability to see and interact with other players on a physical level instead of just “having a better deck” is much more rewarding. In a standard deck-building game, purchase order is so important. Getting that extra money early can make or break your overall strategy. In Trains, being unable to purchase a card on your first turn or two isn’t the end of the game for you, especially if you’re taking that time to expand your rails, making it that much more difficult for other players to invade your territory and share your points.

I also really appreciate the random aspect of the game. Despite owning Trains and playing it at least once a month for the past year, I don’t think I have played with every card that came with the base game yet. Each game has a completely different feel to it, and I haven’t found a single “silver bullet” strategy that leads to a victory, which indicates that the game is well balanced. Also, because the game is not openly antagonistic between players, meaning that there are no direct “attack” cards that negatively impact other players, games often remain light hearted and don’t feel hyper-competitive. I consider this to be a huge plus, although I can see how some people will treat this as a negative. This lack of direct competition, especially early in the game, could make some board gamers see this as “Dominion-lite,” but the addition of the board and tokens requires much more strategic thinking than you would see in other deck-building games.

If you’re a fan of deck-building games, but are tired of the same-old style, Trains is a great addition to your board game collection. It’s also affordable at about $35 on Amazon at the moment.

There is also an expansion that is available that adds twice as many new cards and effects to the game, two new boards, and objectives that are worth victory points. Trains: Rising Sun is a stand-alone game, meaning that it can be played without purchasing the base Trains game. I’ve played the expansion before and now that I have a number of friends that have gotten proficient in the base game, I am looking forward to picking up Rising Sun soon.