Busy, busy, busy! With writing, querying Stormgate around, the new job, and the baby on the way, the website has taken a back seat. But, I decided to take some time tonight to write about Mysterium. By Oleksandr Nevisky and Oleg Siderenko, illustrated by Xavier Collette and Igor Burlakovc, and published by Libellud, Mysterium is best described as a combination of Dix-It and Clue. The main difference here is that Mysterium is a cooperative game for ages 10 and up and plays best with the maximum 7 players. 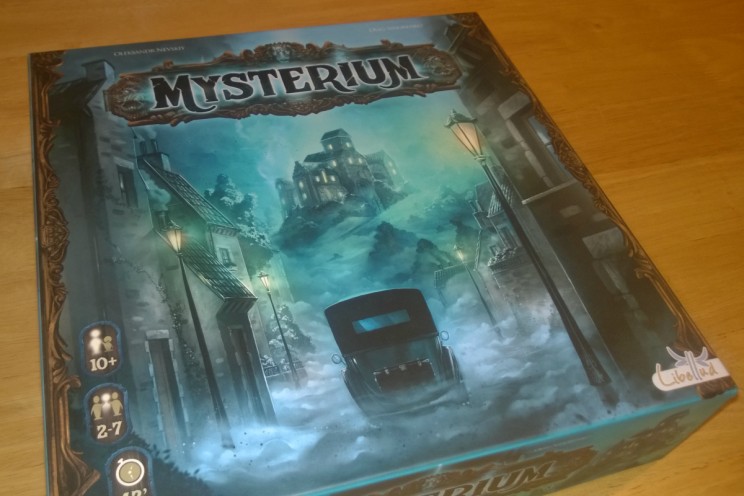 The premise is this: there has been a murder and clairvoyants have been brought in to communicate with the Ghost of the murder victim, in the hopes that they can glean some information as to the identity of the true killer. The trouble is, the ghost cannot communicate through words, but only with pictures. Enter the Dix-It mechanic. Each card that the Ghost gives to the players is meant to somehow signify a person, place, or object that is related to a murder suspect. There is a single combination of these three things for each player, plus a few extras thrown in to make it more difficult.

There is also a betting mechanic, where players can wager on whether they think their companions are correct in their guess that turn. If the players can correctly identify their own unique combination of suspects, the Ghost then reveals the real killer through a combination of three final vision cards. Players that wagered well get to see all three cards, but those that didn’t have to make do with only one or two of the final vision cards. At this point, all cooperation is suspended, and the players select the unique set of person, place, and object that they believe is the real killer. If enough of the players vote for the correct killer, the group wins the game. Simple, right? Right…

Setting up Mysterium takes a little bit of time, maybe 15 to 20 minutes. This is because there are two decks of cards for each of the items to be guessed by the players. The players will shuffle each of the small blue decks, then draw the appropriate number of cards without looking at them. They will then draw the same cards out of the other deck of the same type following the numbers listed on the back of each of the cards. The small blue cards of each type go to the Ghost, while the other cards get laid out on the board. 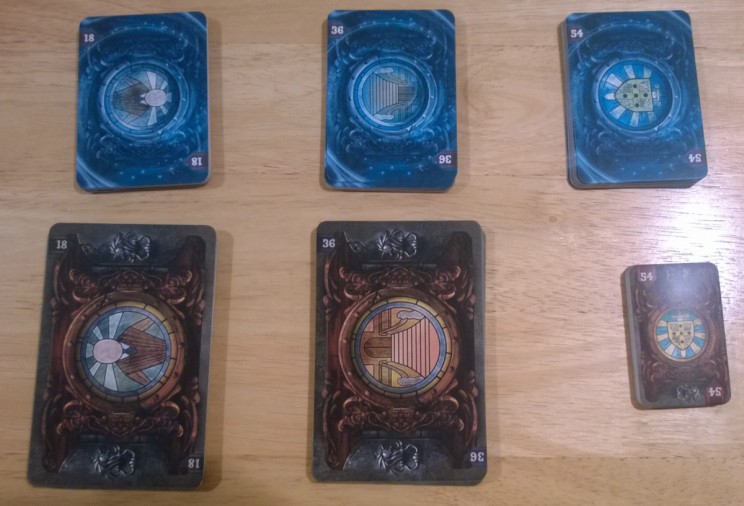 The small blue decks go to the Ghost and the larger decks are placed in play for the clairvoyants to observe.

The Ghost then takes the cards and arranges them in secret into a set for each player in the game. There is a screen with pockets for each of the unique sets of cards so that they remain secret. I have found that flipping the cards 90 degrees after a player guesses the answer to be the best way to keep track of where each player is in the progression. 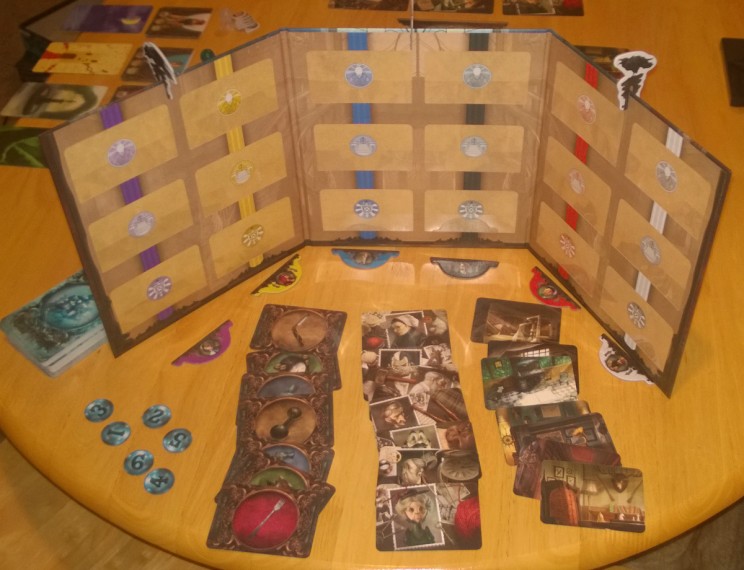 The Ghost gets to select which combination of person, place, and object each player has to correctly guess.

I’m getting a little ahead of myself here. The clairvoyants have to start with the people cards, then move on to places, and finally objects. The Ghost gives the players information by handing out vision cards. The Ghost can give any single player up to 7 vision cards that he or she believes accurately describes the person card the Ghost wants them to place their token on. There is a definite risk/reward system here, as more cards do not necessarily grant additional information. The Ghost then draws up to 7, and repeats the action until he or she is satisfied with the visions that have been handed out. It is possible for a player to not receive any vision cards, if the Ghost believes the cards in their hand may lead that player in the wrong direction.

These vision cards are often crazy, insane, and have very little in common with the card the Ghost wants the players to guess. That means, players are looking at anything from color, to inane objects on each card, trying to find some semblance of connectivity. The players are encouraged to discuss their vision cards once everyone has received theirs. Once Mysterium has moved into this phase of the game, it moves pretty quickly, as there is a timer on how long the discussions can go on. In fact, the time-consuming part of this game is when the Ghost is handing out the vision cards. An inexperienced Ghost can cause the game to drag to a crawl, but at the same time, an impulsive Ghost can send the clairvoyants off on a wild goose chase by giving out too many cards.

Mysterium is a lot of fun with a group that has good communication and is social. Because it plays up to 7 people (6 clairvoyants and 1 Ghost), it fits into a niche that other board games can’t fill. At the same time, because of the mechanics and additional rules required to scale the game down to 2 and 3 players (remember, one of those has to be the Ghost), I feel confident that Mysterium would not be as much fun in small groups. This means that you can’t necessarily bust it out whenever a friend comes by the house that loves board games as much as you do.

Also, I’m pretty sure you can use the vision cards to play an impromptu version of Dix-It, if you’re so inclined and you know the rules of that game. I will admit that I haven’t actually done that yet, but I feel confident that it would work great, since the cards of both games are so similar. Likewise, if you’re bored of the Mysterium vision cards, you could likely use the Dix-It cards to freshen the game up.

At $49.99, Mysterium is a pretty expensive board game, but it periodically goes on sale. I picked up my copy for $35ish, and I was pretty happy at that price point. I’d definitely recommend trying it out, if you see someone playing it. Or, if you see it on sale for a more digestible amount, I would say that it’s worth the money. There’s a lot of replayability here.

One thought on “Mysterium”