I realized this morning that I haven’t posted a new book review in a long time. This whole fatherhood thing is time consuming! Who would have thought?

Before I get into the review, let me do a quick update. Dreamscape is shaping up nicely. My lack of time has been severely cutting down my progress, but I have gotten some good solid writing during lunch at work. The good news is that I have President’s Day off from work, so I am hoping to crank out a few thousand words and really move the story forward.

Because Ben is perfectly willing to sleep on my chest, I have gotten to do a bit of reading, a bit of TV watching, and a lot of Destiny on my Xbox. Mentally, I’m feeling pretty good about the whole family thing. Given my lack of time, I’ve been considering picking up Dragon Speech Recognition software, to give myself time to dictate while walking laps around the downstairs couch at 3 a.m. If anyone has any experience with it, I’d love to hear about it. My understanding is that it takes a little bit to train the software on your voice, and I’d be curious to know how involved the process is. 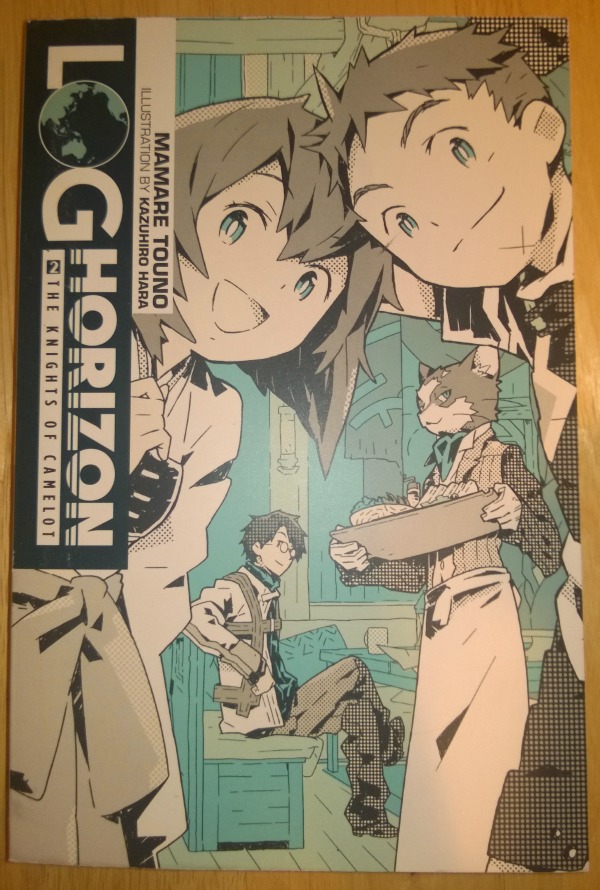 Log Horizon 2: The Knights of Camelot
Where I likened Log Horizon 1 to an episode of Naruto, an anime that focuses on that moment when a battle turns because of some secret ninja art executed at the critical time, Log Horizon 2 is very much a political novel. Let me tell you why that is a great thing.

In the first book, author Mamare Touno established that Shiroe, Akatsuki, and Naotsugu are capable fighters with brilliant teamwork. They used those skills to cross a wild territory and rescue Serara and Nyanta from a city descended into madness. Now, Shiroe and his crew have returned to Akiba and their friends. It isn’t long after their arrival that Shiroe receives word that two of his old traveling companions, a pair of children who got trapped in the world with everyone else, have been all-but-enslaved by one of the guilds in town. Seeing the downward spiral of culture in Akiba, Shiroe convinces his friends that something needs to be done in order to prevent their city from becoming identical to the one they just pulled Nyanta and Serara out of.

The reason why Log Horizon 2 is a political novel is that Akiba is a non-combat zone. All of the protagonists’ combat skills and battle experience are completely useless here. And so, Shiroe hatches a plan to maneuver the trouble-making guilds out of town. But he needs help. He needs an alliance of all the remaining honorable guilds in the city, and since they’re all competing with each other, that may prove to be an impossible feat.

The characters are so far out of their depth that it feels like completely new territory. Shiroe feels much more active in this book than he did in Log Horizon 1, probably because he has to try harder to make progress. There is also a “coming of age” story arc for him that, while foreshadowed, still has a very satisfactory feel when the reader reaches the pay-off.

All of the colorful characters and dialogue return. For example, it is never difficult to tell the difference between Shiroe and Naotsugu because each person has their own very distinct way of talking and speaking. For a fan of anime, these verbal tics aren’t exactly welcome, but they are a familiar stereotype of the genre. Someone like my wife would most likely find them invasive and annoying. The art was done by Kazuhiro Hara in this novel, just like the first, and is actually more pervasive. There are a ton of side characters and, for some reason, getting to see them in all their Manga-style glory helped me to differentiate them in the dialogue a little better.

Which brings me to the bad. All of the idiosyncrasies and incongruities that were so common in the first book have returned. As I mentioned in my review of the first book, these are cultural quirks and tells that I could ignore, but I know a lot of people probably can’t. I just want to make sure that potential readers are forewarned that the author’s prose isn’t any cleaner or “localized” in the sequel than it was in the first installment. 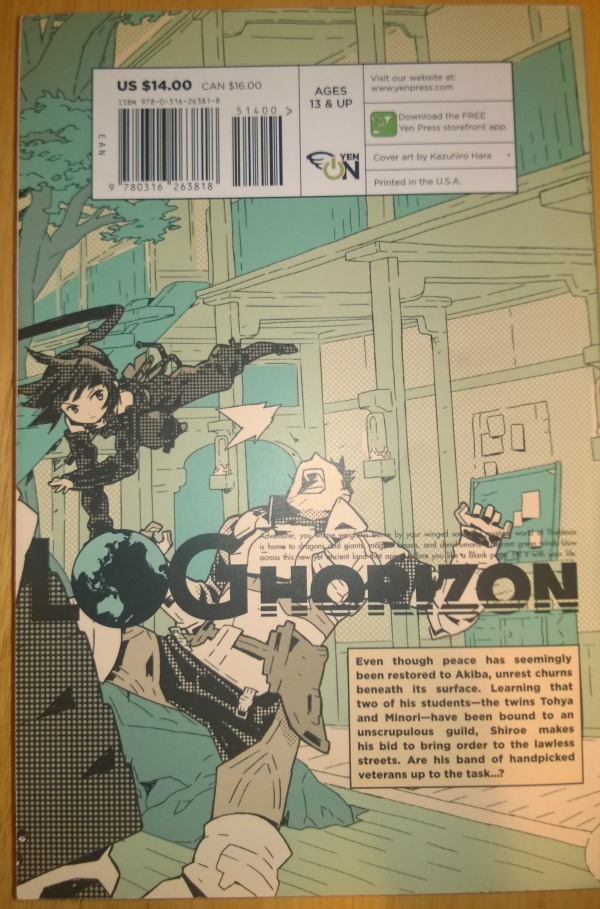 This doesn’t diminish the enjoyment I got out of Log Horizon 2, especially since the overall tone was so different than Log Horizon 1. It was a quick, whimsical read that had a very strong climax for the characters that resulted in real growth that the readers could actually see. And there’s nothing that makes characters feel more alive to a reader than watching them change and grow as they face the challenges set before them. Wikipedia shows that Log Horizon 3: The End of the Game I was released in English on November 17, 2015, and that Log Horizon 4: The End of the Game II will be released on March 22, 2016. Once I can dig out of my ever-growing “to-read” pile, I’ll pick these two up and let you know what I think.

You can find Log Horizon 2: The Knights of Camelot on GoodReads here, and Amazon here. Book 1 in the series, Log Horizon 1: The Beginning of Another World can be found here and here, respectively, with my review located here.