It isn’t a secret that Terraforming Mars is one of my favorite board games of all time.  It shouldn’t be a surprise that when Jacob Fryxelius announced the latest TM expansion on Kickstarter, I had to jump on board.  It arrived in November of 2019 (along with some new double-layered player mats) and I can’t wait to tell you about it. 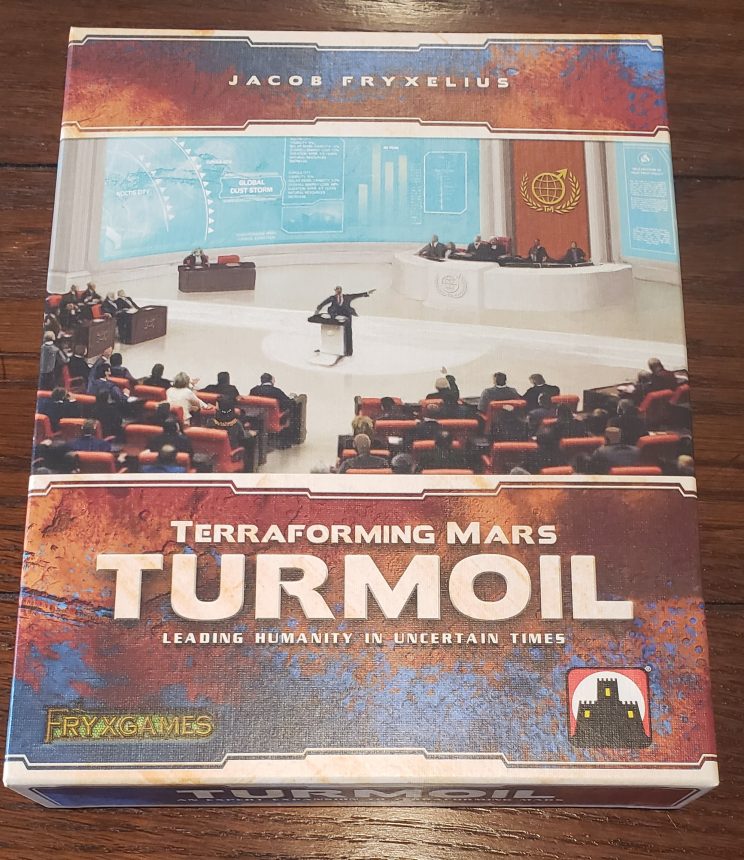 Note: the side of the box says, “An expert expansion to Terraforming Mars.”

Turmoil is the first expansion for Terraforming Mars that requires all of the players to engage with it.  Previous expansions provided different avenues for players to shore up their resources and make the most of their turns, but did not actively punish players when they chose not to engage in their mechanics.  Turmoil doesn’t hold your hand and it doesn’t pull punches.    This expansion adds two new mechanics, one of which the players can interact directly with, the other of which adds randomization and events the players have to deal with. 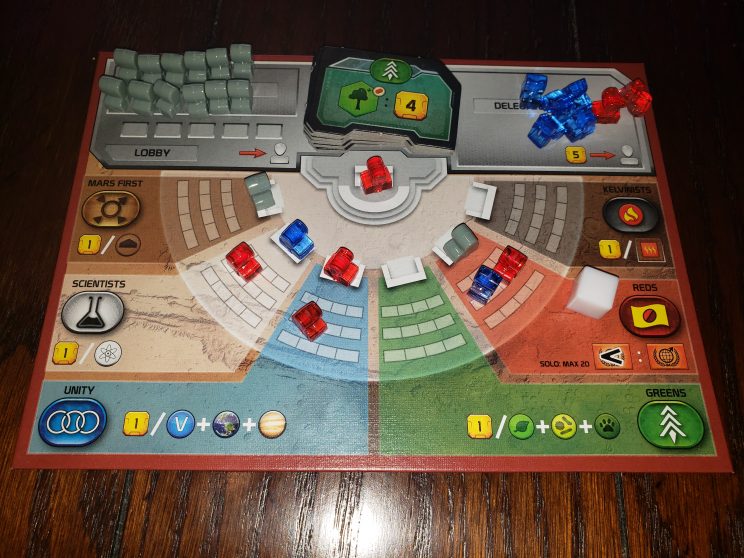 With the proper planning, strategic players can reap great rewards.

The Terraforming Committee isn’t a new concept in TM.  Venus Next was the first expansion to mention the it (in the Solar Phase that was added at that point); however, this is the first time players actively engage with the committee.  Each generation, a new committee chairman is chosen and a new dominant party is selected.  The policy then shifts to that of the party the chairman came from.  Additionally, all players receive the ruling party bonus.  Depending on how specialized players are, their rewards can be significant or trivial–incintivizing players to focus on ensuring their own party stays in power for as long as possible. 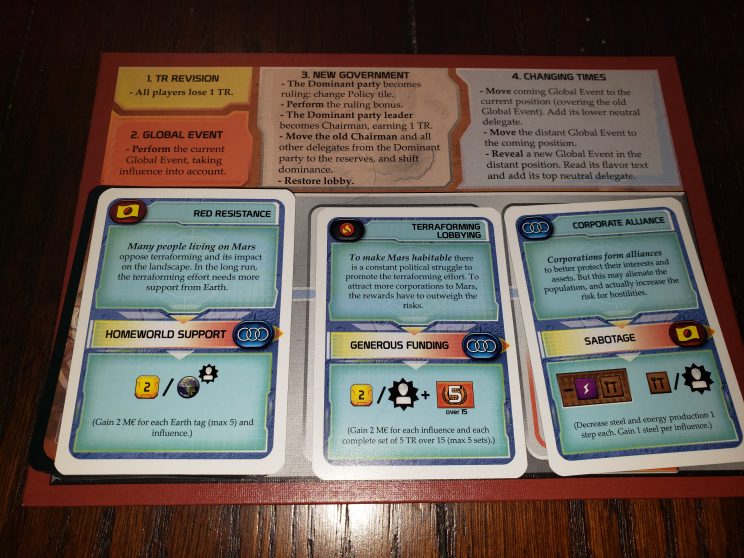 Players don’t control which events are coming, but they do get time to react.

The other new mechanic in Turmoil isthe Global Events board.  Each generation, players either reap the reward or suffer the consequence of the current global event.  Once complete, the coming event moves to the right, the distant event moves to the right, and a new distant event is revealed.  The effects of the events can be bolstered (when good) and mitigated (when bad) by the players Influence in the committee.

I said before that Turmoil requires players to interact with it.  In this case, it does so by unilaterlaly decreasing everyone’s Terraforming Rating at the end of each generation by 1.  Since TR is used when calculating megacredit production AND victory points at the end of the game, the fact that this number can now decay is game-changing. 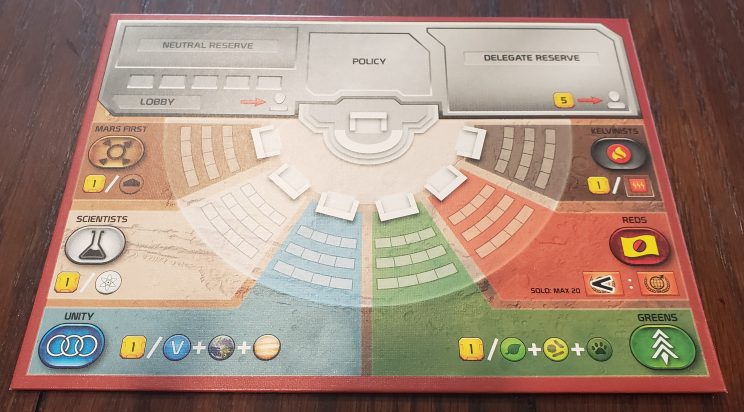 Ruling bonuses are located in the outside corners of each party’s space on the Terraforming Committee board.

Whichever party takes control of the Committee performs its ruling bonus and enacts its policy.  The ruling bonuses typically involve granting megacredits based on a player’s specialization (e.g. the Scientists party grants 1 megacredit for each science tag), but the Reds’ bonus rewards the player in last place (gives 1 TR to the player(s) in last place).

The policy enacted by the ruling party becomes available for players to take advantage of in the next generation.  These policies can be very powerful (e.g., the Kelvinists’ policy allows all players to increase their energy and heat production by 1 step each for a total of 10 megacredits).  The Reds continue their thematic opposition to the terraforming effort by causing all players to pay an additional 3 megacredits for any action that increases their TR, even if that action does not have an inherent cost.  This may serve to deter the lead players from running away with the game for a player specializing in cards that grant end-game points.

Each generation, players receive one delegate to the Committee for free, but may add additional delegates at a cost of 5 megacredits each (of course, each delegate is an action).  The party with the most total number of delegates becomes the dominant party.  Of course, each party must have a leader.  The leader is determined by the player with the most delegates in that party and can change several times in a generation.  Note that a neutral delegate may become a party leader, but more on that when we talk about Global Events.  The party leader of the dominant party becomes the Committee chairman at the end of the generation, scoring 1 TR for that player.

Each generation, when the dominant party takes control of the committee, their delegates are returned to the general pool.  This generational reset means that players cannot “snow-ball” their influence in the Committee and are forced to actively manage their interests each turn.

The other half of Turmoil is the Global Events board.  Each global event not only sets up a boon or bust for players to deal with several generations later in the game, but it also controls the neutral delegates assigned to the Committee. 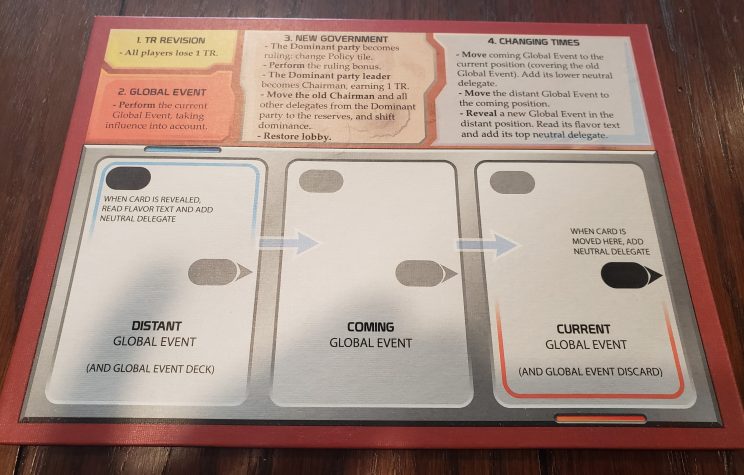 Jacob Fryxelius took advantage of the margin of the Global Events board to add a player aid. Refer to it early and often!

When a new global event is revealed, a neutral delegate is added to the party in the top left corner of the card.  Then, players read the card aloud (if you want, we never did this).  Each generation, these global events cards move to the right, until the land on the third and final space.  When that happens, another neutral delegate is added to the party indicated in the center-right of the card. 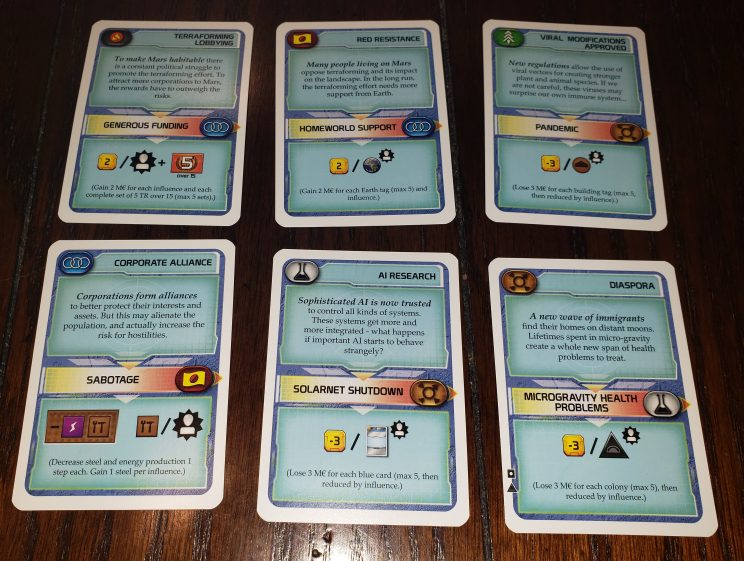 The Global Event cards are (for the most part) an even split between beneficial and detrimental to players.  Might want to brush up on your knowledge of Order of Operations.

While each card explains how Influence impacts its’ Global Event, factoring Influence often seems like a high school algebra project.  For example, the Separatist Movement card results in the Global Event called “War on Earth,” which states, “Reduce TR 4 steps.  Each influence prevents 1 step.”  As we’ve already determined, the maximum Influence is 3, and only if a player controls the Chairman, dominant party leader, and controls 1 additional delegate in the dominant party.  This means that player will lose 1 TR.  As there’s only one Chairman and one dominant party leader spot, this means the other players will lose at least 3 (assuming they have a delegate in the dominant party) and possibly 4 TR this turn.

Turmoil wouldn’t be a TM expansion without new project and event cards. 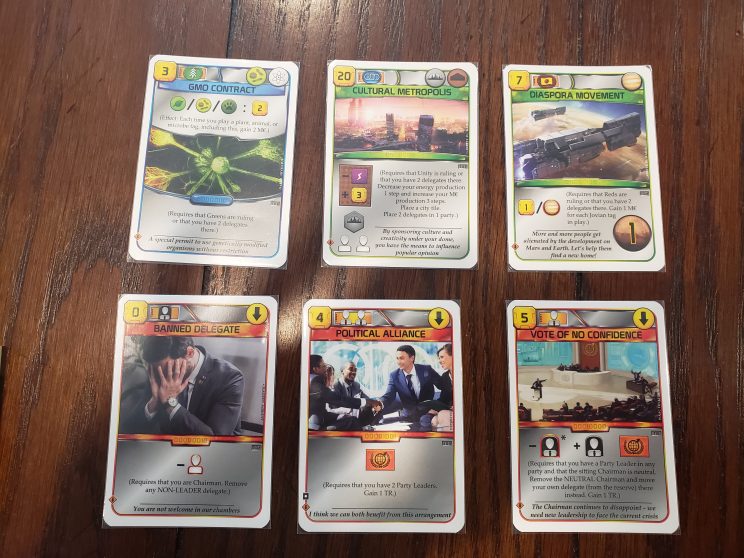 Many these new cards require specific party control in the Committee, a number of delegates within a specific Committee, or even player control of the Chairman position.  These requirements can be very difficult to fulfill, but the megacredit cost associated with these cards are much smaller than other cards of similar value.

Anyone who’s read my TM review knows I use the Broken Token storage solution for my copy of Terraforming Mars.  After Colonies, I wasn’t sure how I was going to fit any additional expansions into a single box. 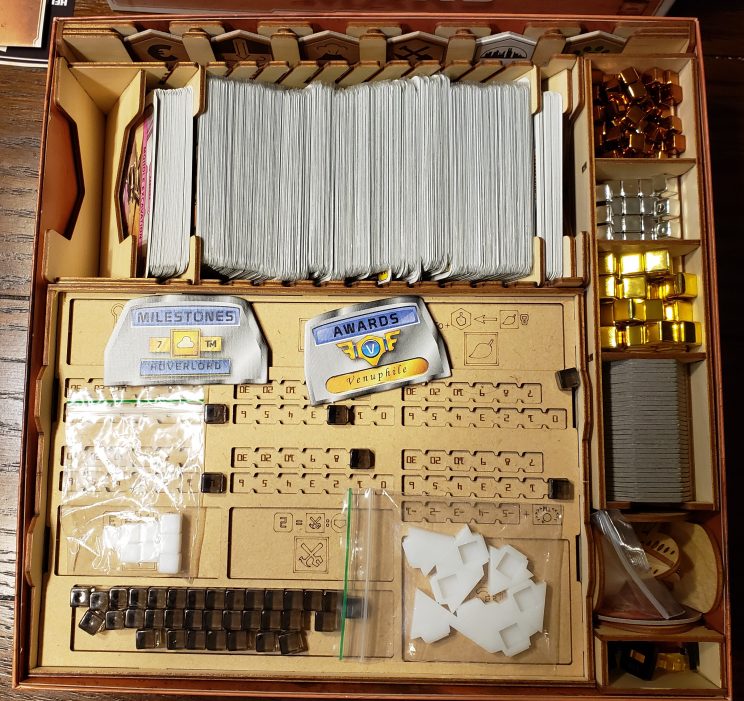 I use the Broken Token’s laser-cut organizer for Terraforming Mars – some assembly required.

The Kickstarter of Turmoil had some neat double-layer player mats that solved all my problems (at least for one additional expansion).

These player boards share identical icons and coloration with the project and events cards, so they’re much easier for new players to use.

In all honesty, the double-layer player mats included in the Turmoil Kickstarter should have been included in the original Terraforming Mars box.  In this case, they were free with Turmoil, so I took advantage. 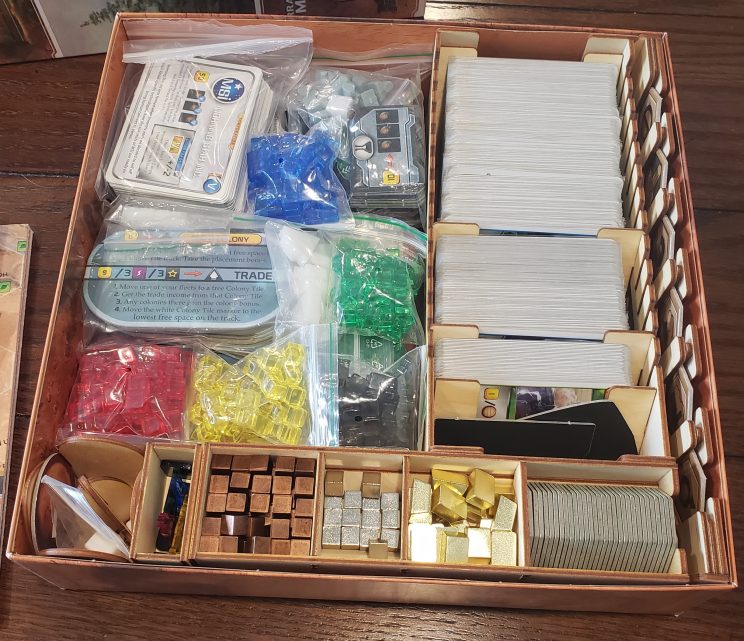 By replacing the Broken Token wooden player mats with the new double-layer ones in the Turmoil Kickstarter, I freed up a lot of space in the box.

One other piece of advice I’d received was to separate the expansions out from the base game when stored.  This means that a full play (all expansions) can take some shuffling to put together, but it makes it easier to play with my group of friends (who like to pick and choose which expansions they want each game).  I’ve also rolled all the Turmoil delegates into the same bags as the colored player cubes for convenience during setup.  Through copious use of plastic bags, I was also able to segregate the majority of the expansion cards and pieces into their own sets.

Are you feeling a bit confused and overwhelmed by Turmoil?  You’re not alone.  I made the mistake of tabling this with two players brand new to TM (but very experienced in other games of similar complexity) and it took 3 and a half hours to finish the game, including rules explanation.

Turmoil is, without a doubt, the most interesting and game-changing expansion for TM to date.  The addition of the Terraforming Committee gives players more to do on their turns and more incentive to specialize.  The Committee also gives players another avenue to interact in a meaningful way.  For the most part, TM is played competitively, but without direct interaction between players:  there are no trades and very few ways of attacking or hindering your opponents.  The Committee serves this role well, once players begin to grasp the consequences and actions available to them.

The Global Events can be severly punishing, wiping out all of the resources a player is holding in a single generation.  The good news is that players have three generations to plan and prepare for them, assuming they haven’t forgotten to look and see what’s coming next.  This means any TM game using this expansion will be extended.  Depending on your available time and the players in the game, this can be a good or a bad thing.

In the end, I think Turmoil is a great expansion, but not a “need-to-own” for Terraforming Mars, the way Prelude is.  I strongly recommend anyone offering to table this make sure that everyone at the table is already familiar with TM and any of other expansions to be included.  Turmoil does play very well with Venus Next, Colonies, Prelude, and the Hellas Basin expansion board.

The standard retail is $35, but Amazon has it for $22.50 while I’m writing this.  Isaac Fryxelius also posted a great YouTube video explaining exactly how a Turmoil turn plays out, and you should definitely check it out before making a decision on whether or not to pick this expansion up.