I am slowly but surely closing in the gaps in my board game collection. A lot of the games I owned played up to 4 people, so I have been looking for games that play more. In addition, up until recently, I didn’t own a single game that could be easily packed or transported for trips. Since my wife and I live halfway across the country from our respective families, board games that cannot be transported are games I can’t share with them. Luckily, there’s a travel edition for that!

For Sale is a property management game for between 3 and 6 players. Your goal is to earn the most money you can through the acquisition of property at auction, and then selling them for a profit. The travel edition of For Sale includes two decks, one for the properties, the other for the sale of those properties. The property deck has 30 cards with values of 1 to 30. There are no duplicate properties. Higher values are worth more in the second phase of the game, lower values are worth less, although there are strategies to mitigate that. The money deck also includes 30 cards, but the values range from $0 to $15,000 and there are two of each value (there are no $1,000 cards in the money deck). Also included is a number of $1,000 and $2,000 tokens for each players’ starting money. 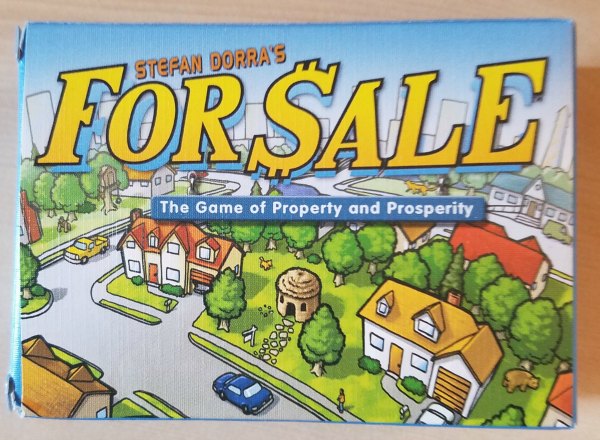 The travel edition is little thicker than a deck of cards, but otherwise is about the same size.

A number of cards (based on the number of players) is removed from each deck and set aside. These cards are anonymous (so players don’t know what properties or money cards are in play) and this step is to make sure that both decks are divisible by the number of players. Likewise, players receive starting money tokens based on the number of players. From there, the property and money decks are each shuffled. The money deck is set aside for now. A number of cards are drawn from the top of the property deck equal to the number of players and arranged in increasing value. This is the property auction. The starting player then decides how much he is willing to pay for the highest ranking property card currently on auction. Play rotates to the left, and the next player has an opportunity to out-bid the first player. Once play has returned to the first player, he/she can then choose to continue bidding or to drop out of the auction. If they drop out, they take the lowest value property card on auction, but pay only half of their bid to the bank (round down). Likewise, the first player can choose not to open bidding and take the lowest value card for nothing, but in reality, bidding $1,000 nets you no loss because of the rounding, so if you have the money, you should always start with $1,000 just to see what the other players are doing.  Essentially, you are bidding to not take the lowest card on auction.

Bidding continues until all players but one have dropped out or can’t afford to continue. The “winner” of the auction pays the full price to the bank and takes the highest card, while every player that dropped out or couldn’t continue pays only half of their bid and takes the lowest value property (whatever is lowest when they dropped out of the bidding). Players take their respective property cards and place them face down in front of them. A new auction is set up from the property deck and bidding continues until there are no cards left in this deck. By the end of the first phase, all players should have between 5 (6 players) and 8 (3 players) property cards in their hand. The second phase of the game begins at this point.

A number of cards are drawn from the top of the money deck equal to the number of players and arranged in increasing value (the same way the property cards were drawn in phase one). Players then secretly select a property from their hand based on that spread of money available. The lowest value property card matches with the lowest value money card; therefore, it is very important to select an appropriate card. If one of the $0 money cards is in play, and you have the cardboard box property card in your hand (its value is 1), you probably don’t want to play it at that point, because you’re guaranteed to get $0 for it. On the other hand, if the lowest value money card on the board is $10,000 and you have that cardboard box, now is the time to play it because you’re guaranteed to get $10,000 for it. This is the part that hangs up most people and is what takes a few rounds to really understand. You’re not guaranteed to get a low return on investment for a low value property. 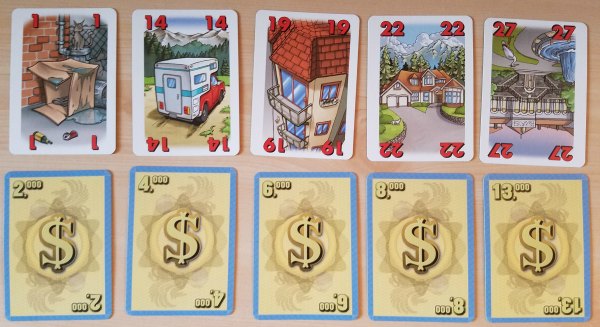 Here is an example of how the property cards line up with money cards during the liquidation phase.

Sale of property continues until all properties have been liquidated. Players then add up the money tokens left over from phase one (property purchasing) and the money earned from phase two (liquidating the properties). The player with the most money wins.

For Sale is easy to play, it’s fast, and plays up to 6 people.  Because a round can be played in 15 minutes by a group that knows the rules, this is a great game to fill in the gaps when you’re waiting for another group to get done with their game or to play a couple rounds before dinner.  The travel edition can be found on Amazon for less than $15 and I plan on bringing it with me whenever I travel somewhere I expect to hang with people who play board games.