The past four or five months have been crazy. I try very hard not to put politics into my blog nor into my book reviews, but the recent election was at the forefront of my mind. Like any other election we’ve had in this country, this election was important to me, but I spent much more time this year reviewing policy stances, evaluating candidates, and sifting through the vitriol and muck that was raked to the surface. My conclusion: I am happy to never run for president.

I thought it was important to keep that separation in my reviews, so now that the election is over, I am turning my attention back to writing, reviewing, and the website. Here’s a quick update.

Dreamscape is on hold. I discovered that, while I love the character interactions and the rivalries that have developed, their reasons for being rivals are weak and in need of work. I think after a quick rewrite of the first half of the novel, things will be back on track, but there is a deadline coming up that takes precedence.

Tor.com has opened up for unsolicited submissions, specifically for epic fantasy novellas with a focus on non-European culture influences. The deadline for submissions is January 12, 2017. Because Stormgate is an epic fantasy novella heavily influenced by feng shui, Hinduism, karate, and Wushu, this project jumped right back to the top of my list for edits and rewrites. A number of people have been helping on the recent polishing draft, for which I am very grateful.

Lastly, I have been meaning to write this review since the final book in the series came out in July 2016.

The Lorien Legacies is a New York Times bestselling 7-book series written by Pittacus Lore and published by HarperCollins. The story follows a group of 9 teenage aliens that came to Earth after fleeing the destruction of their own planet. Their job is to hide, train, and retake their world. They are aided by their cêpan, mentors and guides to help them in their quest. After reaching puberty, these garde, as they’re called, gain tremendous powers that border on the magical. If they can survive long enough to come into their inheritance, they stand a chance.

Except the Mogodorians have brought the battle to Earth. 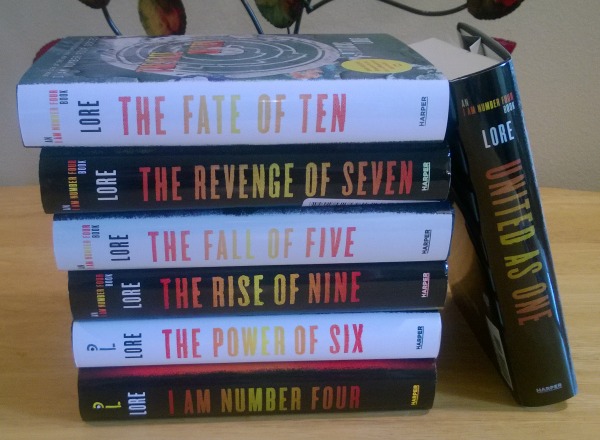 Seven books make up the Lorien Legacies series. See the table at the end of the post for details on the order of publication and where to find each.

I am Number Four is the first book in the series and they made a mediocre movie in 2011 starring Alex Pettyfer, Timothy Olyphant, and Diana Agron. If you saw that movie and were disappointed, don’t let that turn you away from this series. As with so many movies based on books, this one cut the heart out of I am Number Four and kept the spectacle. In fact, this book has one of the greatest hook paragraphs of any that I have ever read. It comes at the end of the first chapter, so let me share it with you:

In the beginning we were a group of nine.
Three are gone, dead.
There are six of us left.
They are hunting us, and they won’t stop until they’ve killed us all.
I am Number Four.
I know that I am next.

The series is full of strong characters, love, teenage angst, violence, hard decisions, tragedies, and victories. The Lorien Legacies is of the “Secret History” genre, meaning that it takes place in our society at the same time as our lives, but hints that events in our history point at different explanations than those given. Pittacus Lore points us at real world events like Roswell, Area 51, and other conspiracy theories, and says “they are here, and there is a war that is being fought in the shadows,” and it is amazing. I love a good UFO conspiracy, and this series seriously scratches that itch for me.

The first couple books are fun, but predictable.  By the time you’re invested in the story, events begin to spiral out of the characters’ control and decisions begin to have consequences.  Needless to say, things get worse before they get better, despite some early victories that build your confidence that everything will be okay.  I will warn you, there are some pretty heart-wrenching twists in the Lorien Legacies.

Another interesting component of this series is that it is written entirely in the first person perspective. I am Number Four is told from the perspective of Four (John Smith), but the second book is told from the perspectives of Four and Seven, and the way you tell who is speaking is the font of the text. As more POVs are added, different fonts are utilized. Even if you forget which font belongs to which characters, it is clear within a few paragraphs who is telling you the story.

If you’re looking for details on the series, here’s a table that can help you find each book and reviews.

The best news is, the series is complete. You can go buy all 7 books today and read from start to finish. Because it only took me two days at most to read each of these novels, and they aren’t small, that’s at least two weeks of solid entertainment. I mention that not because I want to suggest the books are in any way simple. The narrative voice and events are compelling and I felt the need to know what happened next.

In conclusion, this is one of my favorite teen fiction series and I strongly recommend it to anyone who enjoys a good Secret History.  Throw in the fantastical elements, the love stories, and the consequences for each decision, and I don’t think you’ll be disappointed.